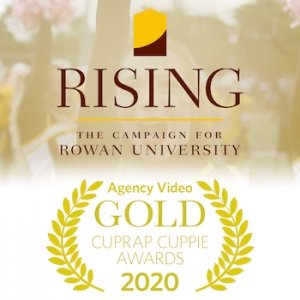 Narrative Media took home the Gold at the 2020 CUPPIE Awards. Our video, Rising: The Campaign for Rowan University, launched Rowan’s first ever comprehensive campaign and took home Gold in the Electronic Media- Agency Produced Video category, which is among the most competitive award categories.

“While we’re thrilled to take home the Gold, this project was a collaborative effort. Rowan has been a client for nearly a decade, and that long term collaborative relationship has helped our work improve every year,” said Andrew Poag, Founder of Narrative Media.

“From start to finish, the team at Narrative Media was great to work with and really helped us achieve our vision for this project,” said Susan Murphy, Director of Advancement Communications at Rowan University. “Highly professional, creative and collaborative, they understood the messaging and visuals needed to best highlight Rowan’s incredible growth and energy.” 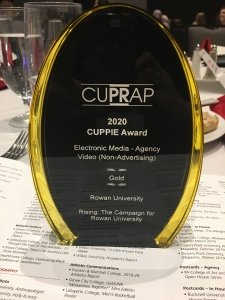 Narrative Media took home the Gold CUPPIE Award in the Electronic Media- Agency Produced category. One of the most competitive categories

The CUPPIE Awards recognize creative excellence in marketing and communications in education and are distributed by the College and University Public Relations and Associated Professionals (CUPRAP). CUPRAP is an organization of over 350 higher education communications professionals representing over 100 institutions.

Narrative Media competed against strong entries from a number of other firms representing colleges from across the nation. This year’s competition attracted over 450 submissions. We’re thrilled to be counted among the winners.

Some Guidance on Federal Funds for Independent Contractors and Small Busine...
Scroll to top